You are here: Home / About Us / State Board of Directors / District 6 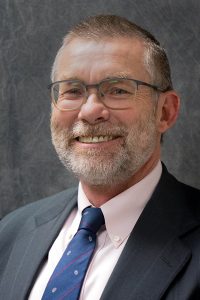 Andy Bater owns and operates Fifth Estate Growers LLC just outside of State College in Centre County, where he grows switchgrass that’s sold to strawberry growers for mulch and used in biofuels research by Penn State. He is also involved in avian habitat improvement projects for two different species of threatened warblers in the wooded areas of the farm.

Bater grew up in a farm family and had a career as a television engineer before returning to agriculture. His focus was on new television technologies, including the transition to digital television, broadcast standards and regulatory affairs, and disaster recover efforts to restore television infrastructure after Hurricane Katrina and the Sept. 11 terrorist attacks.

He is past president of Centre County Farm Bureau and a member of the Penn State Cooperative Extension council for the county. In 2019, he was selected to serve on the Federal Communications Commission’s Task Force for Reviewing the Connectivity and Technology Needs of Precision Agriculture in the United States. He is also a yoga instructor.

Bater and his wife, Chris, have been married since 1981 and have an adult daughter.