You are here: Home / About Us / State Board of Directors / District 16 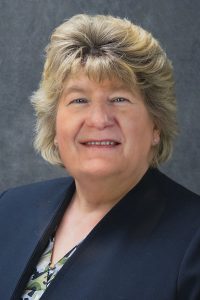 State Board Director Gretchen Winklosky grew up on a large dairy farm and, along with her husband, owns a small grain and direct market hog farm in Derry, Westmoreland County. Winklosky represents District 16, comprised of Fayette, Greene, Washington and Westmoreland counties. She is currently serving as a member of the PFB Executive Board.

Winklosky has also served as a member of PFB’s State Ag Promotion Committee and is heavily involved in FFA and promoting agriculture education in schools. She holds an Honorary FFA Chapter Degree and an FFA Honorary Keystone Degree. All four of Gretchen’s children have served as Pennsylvania FFA State Officers. Winklosky has been a county 4-H leader for seven years.

Off the farm, Winklosky has been a member of the Parish Council for Holy Family Church since 2006. She is also a member of the Derry Area School FFA Ag/Hort Advisory committee. He has served in various roles on the committee since 2011.