PFB President Calls for Resiliency in Agriculture at Press Conference

Building Resiliency in the Agriculture Community

Hershey, Pa. –  Pennsylvania Farm Bureau (PFB) is urging state and federal lawmakers to address several key areas that will build resiliency in the agriculture community, including broadband infrastructure, a climate agenda that builds upon the positive work being made by farmers, additional funding for conservation and supporting increased processing capacity.

These priorities have risen to the forefront as PFB looks to build a strong foundation for the agriculture community, particularly to address challenges created by this pandemic.

“As we look ahead, it’s worth asking if Pennsylvania farmers have all the tools and resources they need for the future,” Pennsylvania Farm Bureau President Rick Ebert said during a news conference held as part of PFB’s 71st Annual Meeting. “Should we work now to address future challenges so that we can build resiliency for farmers, and our rural communities?”

PFB is thankful for recent action at the Congressional level to include broadband funding as part of the recently enacted infrastructure bill. Ebert noted as part of the infrastructure package, Pennsylvania is slated to receive at least $100 million to expand broadband service in rural communities. With those resources coming to Pennsylvania, PFB is calling on state lawmakers to put the appropriate mechanisms in place so that those dollars go to areas of greatest need. Recently, State Rep. Marty Causer introduced HB 2071, which would create a statewide broadband authority to allocate funding to service providers that want to expand into underserved areas, and would establish a Pennsylvania broadband plan.

“It’s our hope that the General Assembly swiftly adopts this legislation so the authority can get up and running and allocate those dollars to communities that need it the most,” Ebert said.

Pennsylvania Farm Bureau further called on policymakers at the federal level to make sure that agriculture has a seat at the table when discussing climate and sustainability and can incorporate the good work that farmers are already doing in these areas. Farmers are growing more food with less inputs, but in order to make further strides, additional investments must be made in research, Ebert noted.

“We can build on the strong foundation of voluntary stewardship and supporting solutions that encourage additional production of biofuels and renewable energy,” Ebert said. “Regulation and mandates don’t make sense when farmers are willing to roll up their sleeves and be part of the solution.”

Lastly, Pennsylvania Farm Bureau is hopeful that state and federal lawmakers will take a close look at building a strong supply chain that encourages additional meat production facilities to open in Pennsylvania. The pandemic has created difficulties in farmers being able to find places to take their animals for processing—at a time when there is growing consumer interest in buying from local farmers.

“Consumers more than ever want to shake hands with the person who grew their food. We need to do all we can to encourage that growth and focus on helping our small processors meet those demands,” Ebert concluded.

Pennsylvania Farm Bureau is the state’s largest farm organization,
representing farms of every size and commodity across Pennsylvania. 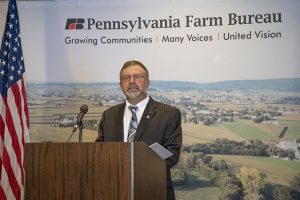