HERSHEY, Pa. – Juniata County farmer Chris Hoffman has been re-elected as Vice President of the Pennsylvania Farm Bureau (PFB) by delegates at the 71st Annual Meeting of the state’s largest farm organization.

“It an honor to know that farmers across the state have put their trust in me to represent their interests at the state level,” said PFB Vice President Chris Hoffman, who raises hogs and chickens on his McAlisterville farm. “I’m excited about what we can do together in making positive changes for agriculture through our unity and grassroots membership. The overall engagement of our farmer volunteers is what makes us special.”

Hoffman has been heavily involved with Farm Bureau over the past 27 years, serving on PFB’s State Board of Directors for ten years and as a member of the board’s Executive Committee. As Vice President, Hoffman is responsible for chairing PFB’s policy development process, where farmers recommend solutions to benefit agriculture and rural communities. He chairs the State Agriculture Promotion Committee, which focuses on raising money for the Pennsylvania Friends of Agriculture Foundation and encouraging county-level events that promote consumer awareness of agriculture. Hoffman also previously served for four years as chair of the American Farm Bureau Federation’s Promotion and Education Committee. He was named America’s Pig Farmer of the Year by the National Pork Board in 2019.

“As farmers, we need to increase our outreach and communications with consumers. Farmers have compelling stories to tell about how they grow healthy food, raise animals and care for the environment, and the public wants to hear those stories,” added Hoffman. “Our organization’s theme this year is ‘Value in Action.’ Now, it is up to Farm Bureau leaders to ensure that members of our Agriculture Promotion Committee, Women’s Leadership Committee, Young Ag Professionals and grassroots leaders, have the resources they need to show the agriculture community the value of our organization.”

Hoffman also serves as a member of the Penn State Board of Trustees, and is involved in other ag organziations.

“Chris continues to be a strong Farm Bureau leader, who has done an outstanding job as a persistent and vocal advocate for farm families across Pennsylvania,” said PFB President Rick Ebert. “Chris played a major role in helping the public and the media understand how farmers continued to work to feed the nation during COVID.” 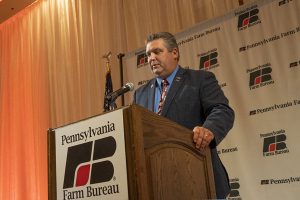 Juniata County farmer Chris Hoffman has been re-elected as Vice President of the Pennsylvania Farm Bureau (PFB) by delegates at the 71st Annual Meeting of the state’s largest farm organization.