HERSHEY, Pa. –  Pennsylvania Farm Bureau (PFB) presented Dave Williams with the Barnraiser Award in recognition of his many years of service advocating for Pennsylvania agriculture through his radio and television shows during PFB’s 71st Annual Meeting. The Barnraiser Award, which is PFB’s highest honor, recognizes individuals who have spent a lifetime in dedicated leadership to the agricultural community.

“My success has been my help, the people who have helped me,” said Williams. “That award really isn’t just about me, it’s about everybody. It’s about agriculture.”

Williams, who still lives and works on his family farm in Honesdale, has been broadcasting for over 20 years, and has become somewhat of a celebrity in the farming community as host and owner of the Pennsylvania Farm Country Radio Network.  His show is broadcast six days a week on 24 radio stations in Pennsylvania, New York and New Jersey. He is a broadcast council member of the National Farm Broadcasters Association, and has served as the northeast reporter for the RFD-TV cable channel. For the last two years, he has hosted the “Pennsylvania Country Roads” show for PCN.

“Telling the story of Farm Bureau is a great thing,” said Williams. “It’s been humbling to represent the people you really care about.”

“Dave has been a great ambassador for farm families across the state. His radio show and the TV show he produces now is evidence of his passion for agriculture,” said PFB President Rick Ebert. “With the Barnraiser Award, we are giving our highest honor to appreciate and recognize all of the contributions Dave has made on behalf of farmers and the agricultural community.”

Williams led efforts by the Wayne/Pike County Farm Bureau to sponsor and organize public meetings on the Clean and Green program and also served as chairman of a multi-county cooperative group designed to boost opportunities for agriculture businesses and to heighten the awareness of farming’s significant contributions to the economy of Northeast Pennsylvania.

“I went to my first (PFB Annual Meeting) in Hershey close to 30 years ago and I realized then how important it was,” continued Williams. “Farm Bureau has been part of my life ever since.” 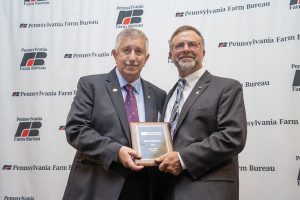