Stacey Jensen
Office of the Assistant Secretary of the Army for Civil Works
Department of the Army
108 Army Pentagon
Washington, DC 20310-0104

Pennsylvania Farm Bureau (“PFB” or “we”) offers the following commentary and recommendations regarding the aforementioned notice by the Environmental Protection Agency and the Army Corps of Engineers (“EPA” and “ACE”, collectively, “the Agencies”) to revise the definition of lands and waters subject to regulatory jurisdiction under the federal Clean Water Act as “Waters of the United States” (“WOTUS”).

PFB is the state organizational affiliate of the American Farm Bureau Federation. Our organization provides political advocacy, information and educational services, and professional assistance for tens of thousands of farm and rural families throughout Pennsylvania. Fifty-four (54) local Farm Bureau affiliates that are actively engaged on behalf of our membership in sixty-three of Pennsylvania’s sixty-seven counties.
General.

At the outset, we are deeply concerned with the Agencies’ intent at this time to make further revisions to their existing standards for regulatory jurisdiction under WOTUS. The Agencies’ August 4 notice comes in the heels of actions taken just last year to revise and reasonably clarify the standards for assertion of federal regulatory jurisdiction under the Navigable Waters Protection Act. The Navigable Waters Rule established clearer and more bright-line criteria for administrative determination of lands subject to and excluded from federal regulation under the Clean Water Act. The Navigable Waters Rule also more keenly recognized than the Agencies’ 2015 WOTUS revamp the intent of Congress and consistent applications of interpretation by the U.S. Supreme Court that federal regulatory jurisdiction of “waters” the under the Clean Water Act is clearly limited to navigable waters and neighboring waterway features.

We are especially concerned with the lack of effort made in the August 4 Notice to specifically identify to any appreciable degree those revisions to the Navigable Waters Rule the Agencies are seriously contemplating or will likely be seeking in rulemaking they will formally propose. It is difficult for farmers, landowners and others who will most likely be affected by further revisions of the WOTUS rule to provide meaningful opinion or insight on the wisdom of standards contemplated by the Agencies or offer recommendations that can satisfy mutual goals without a clear understanding of which standards are being contemplated. Any more detailed comments that farmers and others potentially affected by WOTUS revisions would offer at this time would merely be a speculative response to what the commenter would guess to be the countermeasures to the Navigable Waters Rule being contemplated by the Agencies.

Assuming the agencies go forward in proposing revisions to WOTUS and the Navigable Waters Rule, it is our hope the Agencies will provide greater transparency not only in identifying those specific changes the Agencies are proposing but also providing detailed justification for each change proposed, consistent with the limitation of authority intended by Congress under the Clean Water Act and reaffirmed under recent Supreme Court decisions.
We also hope the Agencies will identify and affirm those standards for WOTUS currently established under the Navigable Waters Rule that the Agencies do not intend to change, with more detailed analysis and data supporting continuance of those WOTUS standards.

Lastly, and most importantly from our perspective, we ask the Agencies be open-minded to the concerns of persons – especially farmers – who will most likely be impacted by those changes to WOTUS contemplated. Farmers in Pennsylvania and across the nation largely felt their legitimate concerns were summarily dismissed by the Agencies during the 2015 changes to the WOTUS rule. The Agencies made a far better effort to consider and address our concerns in last year’s changes to WOTUS adopted under the Navigable Waters Rule. Abstract applications of “science” can “support” virtually any potential outcome or threat that gives rise to a regulatory response. But it is the Agencies’ responsibility to equally apply sound principles of policy in devising a regulatory response that reflects realities and likelihood of occurrence of potential outcomes or threats.

Recommendations:
We would offer the following recommendations that we feel should be guiding principles for the agencies to follow in consideration of any proposed revisions to the WOTUS rule:

1. The Agencies should not make wholesale changes to the regulatory principles of WOTUS established under the Navigable Waters Rule. And the Agencies should definitely not propose changes in regulation that would revert the scope of federal regulatory jurisdiction back to the 2015 WOTUS rule. We feel the principles for determining federal regulatory jurisdiction established under the Navigable Waters Rule struck the proper balance of adequacy in protection of water quality within the limitations of authority established under federal law and Supreme Court precedent, and is a much better application of common sense in regulatory policy than under the 2015 WOTUS rule. Estimates resulting from at least one study concluded that nearly the entire portion (some 98 percent) of Pennsylvania’s land mass had become subject to federal regulatory jurisdiction under the 2015 WOTUS rule. Such an outcome from any assertion of federal “waters” jurisdiction is not only senseless and unacceptable. It also casts a perpetual and unpredictable cloud on whether and to what degree a landowner’s use and management of land may become subject to claim of intruding a “federally regulated water” at some point in the future. Individual farmers cannot afford a battery of scientists and lawyers in determining which areas of the farm may or may not be subject to federal jurisdiction or in responding to assertions of claims of federal jurisdiction violation by zealous enforcers of the Clean Water Act.

2. The Agencies should respect and adhere to the limitations of authority and federal regulatory jurisdiction prescribed under the Clean Water Act and governing Supreme Court precedent. Regardless of claims or concerns by environmental advocates of “potential threats to the environment” from land use activities practices, the Clean Water Act expressly limits the scope of federal regulatory jurisdiction. And limitations jurisdiction have been clearly affirmed and established by court precedent. The Agencies should make a strong effort to prescribe with distinct clarity in their regulatory framework lands and flows that are not subject to federal jurisdiction.

3. The Agencies should establish clear and concrete principles for WOTUS that farmers and landowners can easily understand and readily apply in determining which conditions and activities are subject federal regulatory jurisdiction and which are not. Historically, the WOTUS rules have provided little guidance that farmers and others more exposed to potential federal regulation can practically use and interpret in evaluating the scope and limitation of legal responsibility. As a result, many individuals face the ominous choice of hiring a team of professionals to make preliminary studies and evaluations to determine the scope of federal jurisdiction, assuming jurisdiction applies and subjecting themselves to the extensive and costly federal permitting process, or guessing and assuming they are not subject to federal jurisdiction and risk the financial and legal jeopardy of defending attempted regulatory and enforcement actions by federal officials with legal costs and potential assessment of tens of thousands of dollars per day in fines and penalties and potential jail time. While the Navigable Waters Rule has done a better job in that regard, we believe the Agencies should do more in expressly providing additional bright-line principles for persons to understand and apply.

4. The Agencies should expressly provide and extensively limit assertion of federal jurisdiction of non-navigable and short-term surface water flows and wetlands non-adjacent to permanent and navigable streams. While there may be a chance under abstract applications of “science” that land use activity near waters of temporary flow and isolated wetlands may “impact” permanently flowing and navigable waters, we believe the chance of such occurrence is so remote as to not warrant assertion of federal regulatory jurisdiction.

5. The Agencies should maintain and strengthen existing exclusions of federal regulatory jurisdiction for prior converted cropland, and continue to expressly include those exclusions established under the Navigable Waters Rule. Historically, the prior converted cropland exclusion has been an important component in delineating the limitation of federal authority on land traditionally used in agriculture for production of field crops. Efforts made in the Navigable Waters Rule to expressly define the scope and applications of the exclusion provide farmers with clearer understanding of activities that can be performed with lands that have qualified for this exclusion. And the definition adopted in the Navigable Waters Rule prevents attempts to apply contingent factors (such as type of use) to nullify application of the exclusion on lands whose attributes in protection of water quality have been eliminated.

6. The Agencies should include provisions in WOTUS that honor and defer to states’ determinations of land areas that are and are not subject to regulatory jurisdiction. There is common misassumption among the public at large that land areas neighboring waters and wetlands will not be subject to effective water quality regulation and protection unless federal agencies are proactively engaged. This notion ignores the legal and administrative measures that many states, including Pennsylvania, have taken to protect local streams and waters and the effectiveness those measures have been in maintenance and enhancement of local water quality. Pennsylvania’s scope of regulatory authority is broader than the standard applicable under the Clean Water Act. Officials and affected parties to administrative determinations that delineate areas within and outside the scope of state regulatory jurisdiction should be able to rely unequivocally on those determinations, without jeopardy of contrary or countermanding jurisdictional determinations by federal officials.

We are including as part of our commentary the remarks offered to the Agencies by our organization’s President, Richard Ebert, at the joint listening session of August 26. President Ebert’s remarks are provided in Appendix 1.
Conclusion.

Any questions you may have regarding the discussion above can be directed to my attention. Thank you for the opportunity to provide input on this important matter.

Our organization is a statewide general farm organization that provides political advocacy, informational and educational services, and professional assistance to farm and rural families throughout Pennsylvania. Our fifty-four (54) local Farm Bureau affiliates are actively engaged in sixty-three of Pennsylvania’s sixty-seven counties. We are the state organizational affiliate of the American Farm Bureau Federation.

I first feel the need to express my serious concern with EPA’s and the Corp’s effort to revisit the WOTUS issue on the heels of the substantial changes to WOTUS adopted just last year. Farmers remember too well the agencies’ actions during the public review process for the 2015 WOTUS rule, when concerns of farmers were largely ignored and were verbally snubbed by agency officials as “myths.”

Last year’s changes brought some basic reasonability and common sense to the 2015 WOTUS rule. I hope and strongly recommend you not revert to the political or regulatory actions you performed during the 2015 adoption of the WOTUS rule. Any rule that treats nearly all of Pennsylvania’s land mass as part of federally regulated waterway network is senseless and unacceptable.

It is obviously difficult in three minutes to make more detailed recommendations. But I would offer a few I consider most important for EPA and the Corp to consider as you go forward.

It is also critical for EPA to remain objective and balanced in considering any further change to current criteria governing WOTUS. Despite the wishes of some environmental groups to establish a limitless scope of federal regulatory jurisdiction, our courts have consistently ruled federal authority under the Clean Water Act is limited. Please actively seek input from farmers and try to understand the unique circumstances in land conditions and agricultural production that farmers around the nation face.

Thank you for the opportunity to address you this evening. 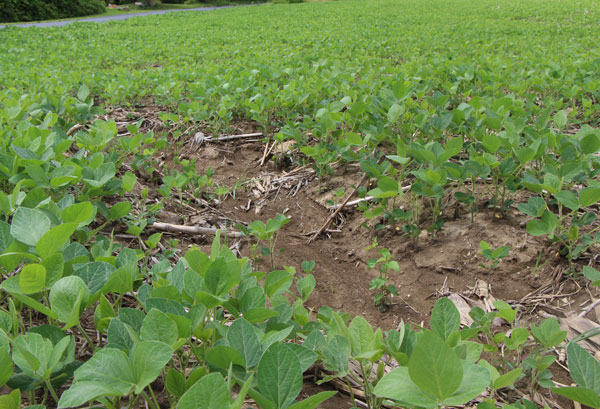