(Camp Hill) – Pennsylvania Farm Bureau (PFB) presented former Pennsylvania Secretary of Agriculture George Greig with the 2020 Distinguished Service to Agriculture Award during the organization’s 70th Annual Meeting. The event was held virtually this year due to the pandemic. The award is presented to an individual whose dedicated work and service has significantly contributed to the advancement of Pennsylvania agriculture.

Greig, who served as secretary of agriculture from 2011 to 2015 during the Tom Corbett administration, has left his mark on Pennsylvania agriculture. During his tenure, Pennsylvania enacted laws that exempted farm families from having to pay inheritance and realty transfer taxes and legislation that trademarked the Pennsylvania Preferred Program and established dedicated funding to the program.

“Every farm family has been touched by George’s work and leadership. He helped push for landmark legislation that exempted farmers from having to pay inheritance taxes. That prevents farmers from having to sell off a portion of the farm following the death of a loved one—simply to pay taxes to the state,” said PFB President Rick Ebert. “George was a tremendous advocate for farmers during his time as secretary.”

Greig has a long history of Farm Bureau involvement. Along with serving as president of the Crawford County Farm Bureau for eight years, he also served for seven years on Pennsylvania Farm Bureau’s Board of Directors. Greig also has extensive community involvement, serving for nearly 50 years as a township supervisor and on his Farm Service Agency Board.

“When we have the number of Farm Bureau members that we have in Pennsylvania, we can make an impact, not only for our state, but also the whole nation,” Greig said. “It is nice to know that you can have an organization like Farm Bureau that can get things done and solve problems.”

Greig grew up on his family dairy farm in Crawford County. In 1976, he and his brother Tim took over the operation. While no longer a dairy, the farm still grows 650 acres of corn, soybeans and hay.

Greig also had the opportunity to advocate for global trade, traveling to China to represent the Pennsylvania’s hardwoods industry during the George W. Bush administration.

Greig said he is humbled to have received the Distinguished Service Award from an organization that he has long been involved with, and is grateful that he had the chance to make a difference in the lives of farm families across the state.

“I couldn’t have done it without the support of my wife, my brother and my family,” Greig said. “I am proud to be one of the people who feed the world.” 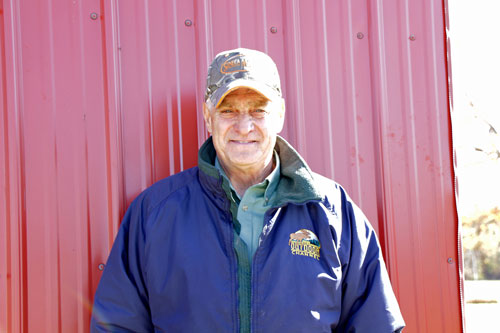