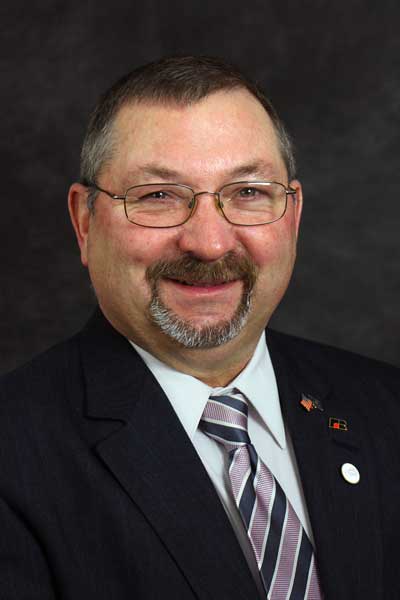 State board director David Graybill operates Red Sunset Farm, a dairy farm in Juniata County, where he milks approximately 60 head of registered Holsteins and raises replacement heifers. In addition to his main feed crops of corn, soybeans, and hay, he grows sunflowers, wheat and buckwheat as cover crops, and his cropland is all no-till. He has a small apiary of 40 hives and sells nucs, queens and honey.

Dave is passionate about conservation efforts, and utilizes buffer strips along waterways, implements contour farming, and has 15 acres of trees as wildlife habitat. Over the years, he has made numerous improvements to the barn, cow walkways, and other features on the farm – all designed to keep water clean and protect the environment. Additionally, he’s put in new manure storage, with a leak detection system and a compost system. Dave has also updated all the incandescent light bulbs to LED lights, and captures plate cooler water and uses it as cow drinking water. In 2021, Red Sunset Farms won the Outstanding Dairy Farm Sustainability Award as part of the U.S. Dairy Sustainability Awards presented by the Innovation Center for U.S. Dairy.

Dave was among the first dozen individuals to be certified as a nutrient plan writer in the state. Since 2012, he has had a voluntary Act 38 nutrient management plan. He has been participating in the Natural Resources and Conservation Service’s (NRCS) programs throughout his 21 years of farming. Moreover, he was one of five farmers to sit on the Pennsylvania Department of Environmental Protection Watershed Implementation Plan Phase 3 Committee. He currently serves on the Chesapeake Bay Partnership Ag Working Group, as well as the Environmental Protection Agency’s Farm, Ranch, and Rural Communities Committee and the Chesapeake Bay Foundation Ag Advisory group.

Within Farm Bureau, Dave is a member of the Executive Committee of PFB’s State Board of Directors, chairs PFB’s Dairy and Farm Policy Committee, and is the former chair of PFB’s Natural and Environmental Resources Committee. He’s also been an active Farm Bureau leader at the county level, serving on the county board, including as membership chair, vice president and president to name a few.

Dave has long been involved in agriculture. He grew up on a farm in Juniata County, where the family raised laying hens. The family sold the eggs and vegetables they produced on a local door-to-door route every week. Dave received his associate’s degree in 1987 from Hesston College in Kansas, and a bachelor’s degree in Agricultural Education from Penn State University 1989, with a minor in poultry, and certification to teach in agricultural education and general science. After college, he worked as a broiler flock supervisor, and then taught agricultural education in Snyder County from 1996-2000.

Dave and his wife, Marie, have been married since 1992 and have a married daughter living in North Carolina and an adult son. Both Dave and Marie serve as deacons in their church and Dave serves on the church board. He serves on the Farmer Advisory Committee for the agriculture departments in Juniata County. He also served on the Beaver Fair Board for five years, on the Snyder County Extension Board, as secretary for West Branch Crop Association and on the Youth Livestock Committee in Snyder County.