You are here: Home / About Us / State Board of Directors / PFB Vice President – Chris Hoffman 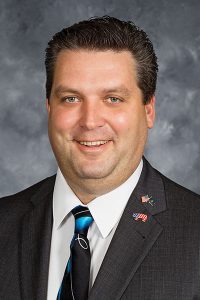 He was appointed to chair the American Farm Bureau Federation Promotion & Education Committee in 2014. In 2015, he was elected by the state’s agricultural societies to the Board of Trustees at Penn State, the Commonwealth’s land grant university.

Hoffman has a long history of leadership at the county level, having served as vice president and president of Juniata County Farm Bureau.

He previously chaired Pennsylvania’s Nutrient Management Advisory Board, and is a past board director of the Pennsylvania Pork Producers Council. He is also a member of PennAg Industries Association, Pennsylvania State Grange and Fayette Township Fire Co.

Hoffman graduated from Middleburg High School. He and his wife, Selina, have four children and three grandchildren.

Along with spending time with family, in his few hours of leisure time, Hoffman likes to golf, fish, hunt and play indoor soccer and flag football.