You are here: Home / About Us / State Board of Directors / PFB President – Richard “Rick” Ebert 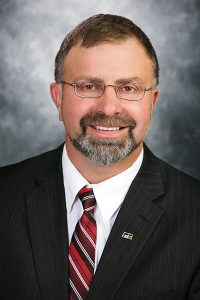 Ebert operates Ebert Family Farms in Blairsville, Westmoreland County. The farm’s 80 registered Holsteins are milked twice daily and the milk is shipped to Pittsburgh-based Turner Dairies. The family also raises 100 breeding ewes for wool and meat, grows vegetables under a high-tunnel greenhouse to supply local restaurants, and produces nearly 300 acres of crops, including alfalfa, corn, soybeans and sorghum. Ebert is working to bring his sons into the farm operation.

He was elected to the American Farm Bureau Federation Board of Directors in January 2016 to represent the Northeast Region and was named a member of the Executive Committee in January 2020. He was appointed to serve on the American Farm Bureau Foundation for Agriculture in March 2020. Ebert served on AFBF’s Trade Advisory Committee from 2016 to 2020. In addition, he is a member of the Board Council at Nationwide, a Fortune 100 insurance and financial services company.

Ebert has given years of service to Farm Bureau at the state and local level. Prior to his election as President, he served as Pennsylvania Farm Bureau’s Vice President for 10 years and represented District 16 on PFB’s State Board of Directors from 1996 to 2004. He was also president of Westmoreland County Farm Bureau and vice chair of PFB’s Young Farmer and Rancher Committee (now Young Ag Professionals). Ebert also led PFB’s Dairy State Committee and presented testimony before the Pennsylvania Milk Marketing Board on behalf of dairy farmers across the state.

In 2009, Ebert received the Mid-Atlantic “Master Farmer” Award, in recognition of his farm success and civic engagement.

In 2008, Ebert was honored with the Charles E. Cowan Memorial Award, from the Professional Dairy Manager of Pennsylvania. The award is given in recognition to a farmer who has shown superior management on their farm, and outstanding leadership within the dairy industry.

Ebert was named 2007 Country Folks Keystone Farm Show “Farmer of the Year.” He was recognized for his involvement and accomplishments in the dairy industry and his involvement in social and agricultural organizations, such as Farm Bureau.

He received his Bachelor’s Degree in Dairy Science from Penn State.

He and his wife, Diane, have four children and five grandchildren. He is a member of the St. James Catholic Church of New Alexandria.